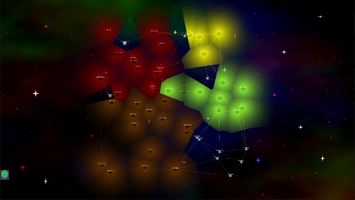 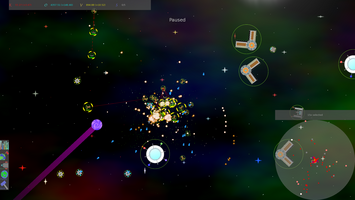 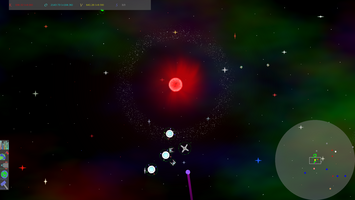 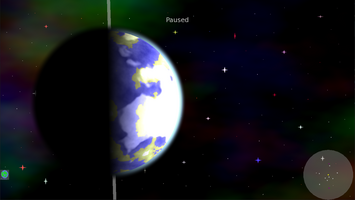 Here I go again releasing a new update, and now I suppose I have to write a new devlog detailing what I added. OK I guess.

First thing I did for this version is I improved the minimap by making it bigger, adding a viewport indicator, adding icons for planets and adding different icons for ships and buildings. You know, it's nuts how much better the game feels with a more functional minimap, it's like I can actually tell where things are now. It's quite useful to be able to see planets on the minimap. And you can click on the minimap to center the view on where you clicked now. That's definitely an essential feature for an RTS game.

Next thing I did after improving the minimap is make planets have a chance to spawn with rings. There's no gameplay difference from rings existing but fuck it I want rings! Aesthetics are important. Like most other graphical things in this game I implemented rings with a shader. I first went over to shadertoy.com and whipped up the shader over there and once I figured out a nice looking rings shader I copy pasted the code into my game, changed a few things to make it compatible and voila, rings. The rings look more like an asteroid belt than Saturn-like rings but whatever.

And since now I have a nice looking rings shader I copy pasted much of that code to add asteroid belts to stars.

After that, for the millionth time, I decided to improve the constellation generator. I decided to do this because I discovered something called Delaunay triagulation. It's basically a way to connect a bunch of vertices so that the connections don't look like a big spaghetti mess. In my old constellation generator, sometimes hyperlanes between stars would be connected in confusing ways, like hyperlanes going through other stars, giving the illusion that the hyperlane is connected to the star it goes over but it's not. With Delaunay triangulation, annoying stuff like that doesn't happen! So I went to look up an algorithm to implement Delaunay triangulation and my brain almost fucking melted trying to understand that shit! Well, I couldn't figure out how to implement the algorithm because I'm dumb as shit. Luckily, someone much smarter than me made a C++ library for Delaunay triangulation, and it's MIT licensed too! My savior, my hero! I added that motherfuckin library into my project and fuckin implemented a brand new constellation generator using it. With this new generation, the hyperlane connections between stars are much better.

With that, I noticed I have a new problem. That problem being that my empire border drawing fucking sucks. The borders would overlap eachother until you pretty much couldn't see any borders at all and it became a spaghetti mess. So to fix that problem I scrapped the old border shader and replaced it with a new shader that uses a voronoi diagram to shade the borders https://en.wikipedia.org/wiki/Voronoi_diagram . Voronoi diagrams are so easy to understand that even a dumbass like me can make one. With that, now the borders don't overlap eachother, and it looks better.

Then after that I added a bunch of miscellaneous features that I don't feel like talking about that you can see in the changelog: https://github.com/pancakespeople/At-Odds/releases/tag/alpha-3.1

Also I added the beam laser weapon which is a weapon with a long cooldown but fires a cool laser that is always 100% accurate and hits the target instantly. The weapon doesn't use any projectiles but has a purely cosmetic laser beam effect. Originally I wanted the laser beam effect to fade away with time but I fucked up the calculations and instead it flickers instead of fading out. But I liked how the flicker effect looked so I kept it in the game.