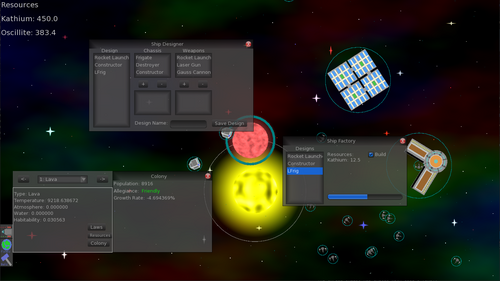 I released a new version, alpha 2.2. The biggest feature of this release has to be the ship designer gui. This system is really powerful because now you can have ships with all kinds of different weapon combinations and I think it'll be cool that players can experiment with different ship designs and what not. The system is simple, you select one chassis and then add weapons up to the chassis maximum weapon capacity. Not the most in-depth system ever but it's much better than just having ships with predefined weapons. Frigate chassis can't hold very many weapons but if I ever get around to adding capital ships to the game, oh that'll be sexy. Currently there isn't very much you can do with the ship designer because there's only 2 combat ship chassis in the game, ah, back to reality.

Factions only start with one of the three basic weapons (laser, machine gun or rocket launcher), chosen randomly and can only find new weapons atm by plundering these new derelict spaceships I've added that has a chance to spawn in every solar system.

And the last thing I want to go over is the new system for defining object types. So, objects like projectiles, weapons, spaceships, buildings, etc, can have many different types. Destroyers move slower than frigates and of course have a different sprite, but they are still both a "Spaceship". Projectiles deal different amounts of damage. Yeah you get the point. Previously in order to construct objects of these different types I just used an enum and long switch statements in the constructor. That system gets messy after a while so I removed it all and replaced it so that object types are defined in text files. Here's an example of what a weapon type looks like now:

Now it is much cleaner to define object types and it is much more moddable as well because now you don't have to modify the source code in order to define a new weapon or whatever.

Anyway, what I'll probably work on next is buildings on planets and then after that, maybe a technology system? If anyone here decides to check out the game then please let me know if you find any bugs or crashes and feedback or suggestions are welcome as well.