Time for another release. This one is definitely my biggest release for this game so far. That's why I'm upping the major version number and calling this one Alpha 3.0. Yay! Biggest features of this release are the trade system, the tech system and the new soundtrack. Let me talk about the trade system first.

I've always wanted to simulate some sort of dynamic trading system in a game. So I've finally went ahead and implemented such a system in this game. The way it works is that planet colonies have goods, and each of those goods has a supply and a demand. Colonists are gonna have to eat and drink, so supply for food and water is gonna go down. And demand for food and water is gonna go up as the population increases. Colonies produce goods based on what resources are available on the planet. So a planet with a lot of water is gonna produce a lot of water goods. And a planet with a high habitability rating is gonna produce a lot of food. Every so often, colonies send out a trading ship to other colonies that takes goods with a lot of supply at the origin planet to colonies with a lot of demand for that good. Trading increases the wealth score of both the colonies. The wealth score determines the colony's demand for consumer goods and luxury goods. Colonies have a value from 0 to 1 called "stability" where 0 is total government collapse while 1 is "everything is A-OK." If the demand for stuff like food, water, consumer goods and luxury goods isn't met, the stability will go down. Likewise, if they are met, then the stability will go up. Stability affects the colony's resource extraction rate and growth rate.

If you're evil, you can destroy your enemy's trading ships to cause a supply shortage, then just wait until either everyone on their planets dies of thirst or starvation or civil war breaks out due to supply shortages and rampant cannibalism collapses the colony. Maybe just bombing them with nukes is the more ethical action in that case.

So, having your trade routes plundered could lead to a domino effect that collapses your entire empire. Fun! Anyway, enough about trading, time to talk about the tech system.

The tech system, as it is right now, isn't very different from other 4X games, you build science labs, they produce research points, you spend those research points on tech. And tech unlocks some new things that you can use. There is a limit for how many science labs you can build in each star system, this limit is determined by the number of planets in the system divided by 3. So a system with 9 planets can have 3 science labs. This sort of represents scientist's ability to do research, more planets means more stuff to study, so more science labs are allowed. I'm not sure if that is the best way to determine the science lab limit, I might replace that with a "Command Center" building that can be upgraded to increase the science lab and ship factory limits in a star system.

Something I changed in this release is the constellation generator. The previous constellation generator was a horrifyingly messy meme recursive function that didn't even output the correct amount of stars. I'd tell it to generate a constellation of 25 stars and it would produce 40 stars, or 22 stars, or 34 stars. It was just fucking wild, it was one of the first things I coded for this project and I was rusty at C++ at the time so no surprise that it was like that. Lol. Anyway, so I scrapped that bullshit and replaced it with an iterative function, NOT recursive, that generates constellations that look almost the same but this time it actually outputs the correct number of stars. It was actually a bit difficult to recreate the function because the original was just pure spaghetti and I couldn't figure out what it was doing, but I figured it out.

OK, last big feature to talk about, my fingers are getting tired from all this typing. The soundtrack. For the past few months I've been working on a soundtrack for the game. I'm a musician, I have experience making music, I play guitar. I don't have a good way of recording guitar so I just used synths, piano and midi instruments to make the soundtrack. My philosophy for making music is that it mustn't sound happy. EVVVVEEEEEERRR! Currently the soundtrack has 10 tracks, all made by me. My favorite one is "Asphyxiated" (it has a nice groove) and my second favorite is "Invasion". The soundtrack is included with the game and plays in the background while you play. It's also possible for you to add/remove tracks to be played by simply adding/removing the sound files from the "data/music" directory. They must be .ogg files though.

So anyway, that's version alpha 3.0. I haven't gone over everything that I added to the game in this devlog because that would be too much typing. Heres the full changelog: https://github.com/pancakespeople/At-Odds/releases/tag/alpha-3.0

In the future, I think I'll do some quality of life improvements and then maybe work on adding pirates. Here's what my trello board looks like: 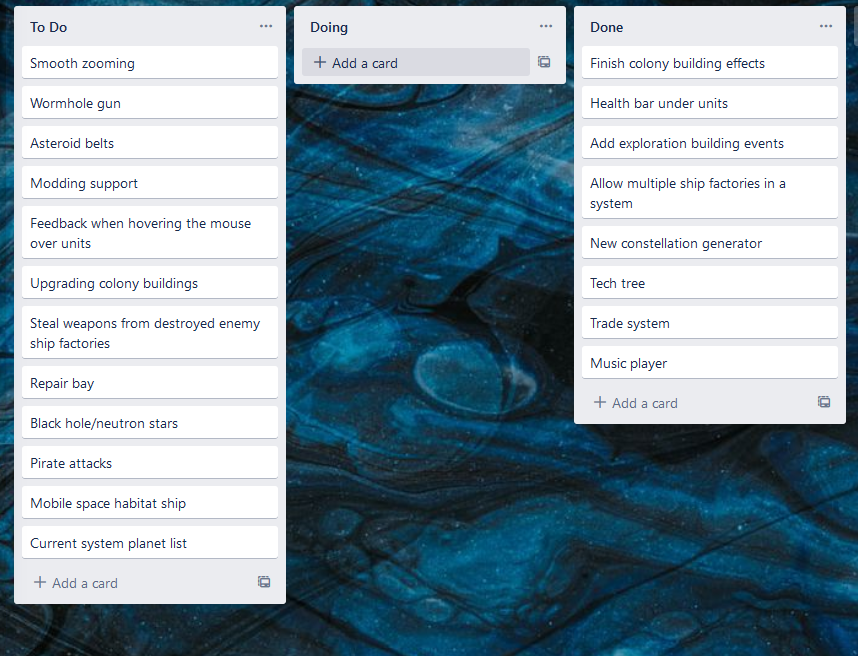 Of course, that's far from everything I want to add to the game, you see, I have trouble organizing my thoughts and putting my ideas down on a trello board.